Nathan grew up outside of Charlotte, North Carolina, where basketball, baseball and water sports were his passions. He played a variety of sports growing up but at the age of 11 he began playing competitive basketball year round in the Amateur Athletic Union. He has competed in the AAU's National Invitational Tournament four times and placed as high as fifth in the US. In high school he played basketball, soccer and tennis at the varsity level. With a strong background in sports he decided to pursue a Bachelor of Science in Physical Education at The University of NC at Greensboro where he graduated with honors in 2007. During his summers he worked as a camp counselor and tennis coach. Nathan began his teaching career at The John F. Kennedy School in Berlin in 2007. He recently spent the 2010-11 school year teaching English and Sport at The Europaschula am Gutspark, Falkensee before returning to JFKS. Outside of work, Nate enjoys a variety of sports and plays competitive fast-pitch   softball in Germany's Mixed-Softball League. 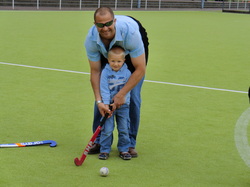 _Joshua is originally from upstate New York where he attended Salisbury Prep School in Connecticut and went on to earn his Bachelor of Arts in Education with dual focuses in Physical Education and Health at Ohio Wesleyan University. Throughout his academic career he has participated competitively in American football, ice hockey, rugby, lacrosse and rowing.  Specifically in his collegiate career he was a 4 time letter winner for American football,  captain of the Football team his senior year and was an All-American in weightlifting and conditioning at the Ohio Wesleyan University. He has been teaching and coaching for the past fourteen years and is currently a Physical Education teacher at the John F. Kennedy elementary school, in Berlin.  Josh has extensive experience in coaching a wide variety of sports that include American football, field hockey, weightlifting, wrestling, baseball, track and lacrosse.